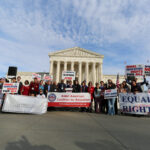 Livingston New Jersey. On Sunday October 30, 2022, Asian American Coalition for Education (AACE) and 15 partner organizations successfully held an “Equal Education Rights for All” Rally in front of the U.S. Supreme Court. This rally was held in support of the landmark lawsuits by Students for Fair Admissions (SFFA) against Harvard University and University of North Carolina at Chapel Hill (UNC).

1. Since 1882 Chinese Exclusion Act, Asian Americans have been harmed by race-based policies. In recent decades, we have formed many grassroots organizations fighting against educational discrimination in California, Maryland, Massachusetts, New York, and Washington.
2. Asian American communities have been fighting for equal education rights in college admissions since 1988. We stand firmly behind SFFA since it joined our effort in 2014, by filing lawsuits against Harvard and UNC respectively.
3. Using race in college admissions is wrong because it unjustly imposes higher admission standards, and excludes Asian American students from the colleges they would otherwise be admitted to except for race. Because of such horrendous discrimination, many Asian American applicants have to hide their racial identity when applying for America’s selective colleges. Unfortunately, in 21st century of America, our children are still being treated as second-class citizens.
4. Using race in college admissions is a policy failure. It never lifted up education performance of African and Hispanic American children. The crux of affirmative action is that politicians use Asian Americans as a scapegoat to cover up their failure to provide quality K-12 education to Black and Hispanic children, the root cause behind a lack of racial diversity in particularly selective colleges.
5. Using race in college admissions is both unconstitutional and illegal because it violates the equal protection clause of the 14th Amendment and Title VI of the 1964 Civil Rights Act, which ban racial discrimination in any institution receiving federal funding.
6. American people are on our side. In 2019 and 2022, using scientific survey methods, Pew Research Center consistently found: “Majorities across all racial groups say colleges should not consider race in admission.” Three out of four Americans support us!

In his speech, Mr. Edward Blum, the president of SFFA exposed that Harvard and UNC illegally used higher admissions standards, racial balancing and racial stereotypes (lower personal rating) to limit Asian American enrollment in favor of white, Hispanic and Black applicants. SFFA asks the U.S. Supreme Court to overturn its 2003 ruling in Grutter v. Bollinger, which upholds the use of race in college admissions.

In the rally, AACE President Yukong Mike Zhao said, “Today, standing in front of the U.S. Supreme Court, we want to ask the Justices: It’s time to realize Dr. Martin Luther King’s Dream. We do not want our children to be judged by the color of their skin, but by the content of their character and merit. Please honor the equal protection clause of the 14th Amendment and eliminate the use of race in college admissions. Please end anti-Asian discrimination and safeguard equal education rights for ALL Americans! “

You are welcome to click the following link to watch the inspirational speeches given by our outstanding speakers:

Asian American Coalition for Education (AACE) is a non-political, nonprofit, grassroots national alliance with over 300 partnering organizations nationwide. In May 2015, founders of AACE united 64 Asian American organizations and filed a civil rights complaint against Harvard’s anti-Asian discriminatory admissions practice. AACE galvanized Asian American communities to stand firmly behind SFFA and exposed the Ivy League college’s anti-Asian discrimination on the national stage. Over the last eight years, in support of SFFA, AACE teamed up with over 360 Asian American organizations, organized the Boston Rally in 2018, encouraged Asian American students to join SFFA’s lawsuits, and filed four amicus briefs. Over the years, besides supporting SFFA, we have advanced the cause of equal education rights for the Asian-American community in many other areas, including federal adoption of AACE policy recommendation on college admissions in July 2018, federal lawsuit against Yale University in 2020, support to Asian Americans’ fights for equal education rights in Maryland, New York, Washington, California, Massachusetts and other states. AACE is the proven leader in fighting for Asian-American children’s equal educational rights.