Livingston, New Jersey: On December 19, 2019, the Asian American Coalition for Education (AACE) awarded Ms. Holly Ham, former Executive Director of the White House Initiative on Asian Americans and Pacific Islanders (WHIAAPI), with the “Champion of Equal Education Rights” award. Ms. Ham received this honor for her outstanding support for advancing the noble cause of equal education rights and her excellent work to promote our dynamic Asian-American community.

Ms. Holly Ham has dedicated her prolific career in both the public and non-profit sectors to increasing democratic representation of Asian Americans and our community’s common welfare. In her official capacity as the Executive Director of WHIAAPI, Ms. Ham played a key role in facilitating the advancement of AACE’s policy recommendations and other concerns to the Federal Government under the Trump Administration. Moreover, her leadership provided effective channels of communication between AACE and the U.S. Department of Education Office for Civil Rights (OCR). Her significant contributions to AACE’s fight for equal education rights are emblematic of the current administration’s willingness to grant equal protection of the laws to Asian Americans, a remarkable shift from the previous administration’s divisive politics.

In May, Ms. Holly Ham delivered the keynote speech at AACE’s First National Conference on Equal Education Rights, reaffirming that the American spirit stands for equal opportunity, not equal results. In October, Ms. Ham accepted a new position as Senior Advisor at the U.S. Department of Commerce, Minority Business Development Agency. We are confident that she will continue to work with our communities to promote innovation and prosperity for Asian-American families and businesses.

Mr. Yukong Zhao, the president of AACE said: “Ms. Holly Ham is an outstanding leader for the Asian-American community. Ms. Ham’s public advisory work at the Federal Government to inform and guide policies impacting AAPIs is complemented by her continued commitment to help strengthen families, neighborhoods and communities. As we send our sincere congratulations to Ms. Ham for accepting this well-deserved award, we also wish her all the success in her new post at the Department of Commerce!” 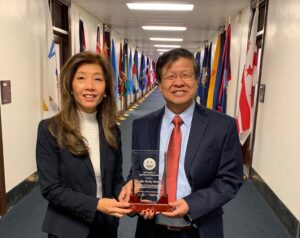