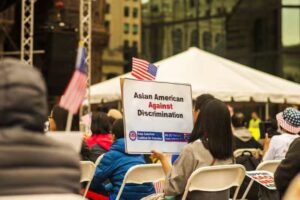 In recent years, many studies have uncovered overwhelming evidence that Ivy Leagues Universities and other selective schools have been engaged in systematic and continuous discrimination against Asian-Americans in the college admissions process:

Golden (2007)— The discrimination against Asian-Americans by Harvard and other elite universities was so severe that Golden dedicated a special chapter “The New Jews” to compare it to the discrimination suffered by Jewish Americans in the 1920’s and 1930’s. He stated that “most elite universities have maintained a triple standard in college admissions, setting the bar highest for Asians, next for whites and lowest for blacks and Hispanics.” He also provided various qualitative examples as to how Harvard and other elite schools use various stereotypes to discriminate against Asian-American applicants.

Unz (2012)—The share of Asians at Harvard peaked at over 20% in 1993, then immediately declined and thereafter remained roughly constant at a level 3–5 percentage points lower, despite the fact that Asian-American population has more than doubled since 1993 as has the number of highly qualified Asian-American applicants. “The relative enrollment of Asians at Harvard was plummeting, dropping by over half during the last twenty years, with a range of similar declines also occurring at Yale, Cornell, and most other Ivy League universities.”

Sander (2014)— “No other racial or ethnic group at these three of the most selective Ivy League schools is as underrepresented relative to its application numbers as are Asian- Americans.”

The discriminatory practices by Harvard and other Ivy League universities have caused tremendous harm to students in the Asian-American community: stress/mental health issues, pressure to study more as the bar is raised higher; lack of trust in American institutions; self-identification crises; and fortification of racial barriers. For each and every Asian-American college applicant, such practices engender a feeling that, being Asian-American, he or she is somehow less American than his or her peers of other racial backgrounds, and he or she does not, and will not, ever have full citizenship as an American.

In its ugliest essence, such practices are remindful of the past discriminations against and exclusions of Asian-Americans, including, among others, The Chinese Exclusion Act of 1882; discrimination against Asian-American businesses such as that discriminating against Chinese-American laundries that was struck down by the United States Supreme Court in Yick Wo v Hopkins (1882); the segregation of Asian-American schoolchildren in San Francisco’s schools in the early twentieth century, a practice that was ended only when President Theodore Roosevelt intervened at the insistence of the Japanese government; and the internment of Japanese-Americans during World War II. Shockingly, America’s elite universities, even today, are still violating the civil rights of Asian-American applicants on a continuous and systematic basis, and have been able to carry out their patently unconstitutional activities with little or no governmental interventions. It is imperative for the federal government to intervene in a forceful manner to protect the constitutional rights of Asian-American applicants from continued infringement by Harvard and other universities.

In its federal lawsuit against Harvard, Students for Fair Admissions, Inc. has provided detailed evidence which proves that Harvard has (1) intentionally discriminated against Asian-Americans; (2) employed racial rebalancing, a de facto racial quota; (3) used race to an extent well beyond its being merely a “plus” factor in admission decisions.

Specific laws violated: Title VI of the Civil Rights Act of 1964, Fourteenth Amendment of the U. S. Constitution.

Exhibit 1: Trends of Asian enrollment at Caltech and the Ivy League Universities,
Compared with growth of Asian college-age population (by Unz) 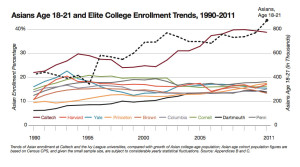 Exhibit 1 shows that the number of college-age Asian Americans (and, we can surmise, the number of Asian-American applicants qualified to attend select schools) has risen dramatically in the past 25 years. But the percentage of Asian Americans actually enrolled (as well as, it is fair to assume, the percentage admitted) has remained constant at those schools employing a holistic admissions process that utilizes an applicant’s race or ethnicity in deciding whom to admit. Cal Tech, a school that does not use race as a factor in admissions decisions and puts more weight on academic credentials, has seen its Asian-American enrollment increase as the number of outstanding Asian-American students in the applicant pool has increased. 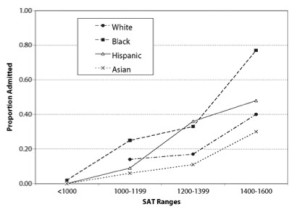 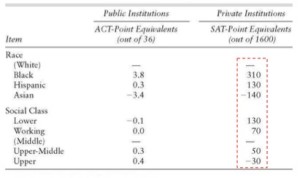 Exhibits 2 and 3 demonstrate the breathtaking disparity in the academic qualifications of Asian-Americans and Black, Hispanic, and White students admitted to selective schools.

1. Students for Fair Admission, Inc.’s Complaint Against Harvard University, filed in the U.S. District Court for the District of Massachusetts Boston Division, November 17, 2014;

3. Golden, Daniel, The Prices of Admission, How America’s Ruling Class Buys Its Way into Elite Colleges —and Who Gets Left Outside, released in 2007, ebook edition.

8. Tony Lee, Millennials are the most diverse generation in American history, and they overwhelmingly oppose race-based affirmative action, breitbart, 5/2014
http://www.breitbart.com/big-government/2014/05/18/mtv-survey-88-of-millennials-oppose-race-based-affirmative-action/

The Economist: The model minority is losing patience, 10/2015
http://www.economist.com/news/briefing/21669595-asian-americans-are-united-states-most-successful-minority-they-are-complaining-ever

Bella English, To get into elite colleges, some advised to ‘appear less Asian’, Boston Globe, 6/2015
https://www.bostonglobe.com/lifestyle/2015/06/01/college-counselors-advise-some-asian-students-appear-less-asian/Ew7g4JiQMiqYNQlIwqEIuO/story.html

DAVID FRENCH, What Ivy League Affirmative Action Really Looks Like — from the Inside, National Review, 5/2015
http://www.nationalreview.com/article/418530/what-ivy-league-affirmative-action-really-looks-inside-david-french

Michael Pearson, Mindy Kaling’s brother: I faked being black to get into medical school, CNN, 4/2015
http://www.cnn.com/2015/04/07/living/feat-mindy-kaling-brother-affirmative-action/

Joseph Pomianowski, Yale Law School Is Deleting Its Admissions Records, and There’s Nothing Students Can Do About It, New Republic, 3/2015
http://www.newrepublic.com/article/121297/yale-law-deletes-admissions-records-congress-must-fix-ferpa

Kevin Kiley, Think Outside ‘The Box’, Inside Higher Ed, 10/2012
https://www.insidehighered.com/news/2012/10/12/asian-american-students-perceive-bias-university-admissions-and-counselors-want