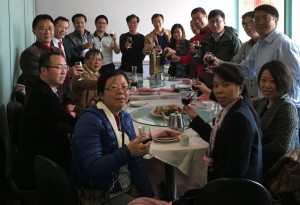 Dr. Jack Ouyang, one of the founding members of Asian American Coalition for Education (“AACE”), along with Dr. Ting Dai, Secretary of AACE, hosted a greet-and-meet lunch event with local Chinese community leaders resident in Washington DC metropolitan area. It is part of national outreach efforts by AACE for the leadership to gather ideas, exchange thoughts and seek collaborations.

The lunch meeting circled around how AACE works collaboratively with DC metro area Asian ethnic groups. Dr. Jack Ouyang briefed the progress of the complaint filed through the Department of Education and Department of Justice against Harvard University and the amicus brief filed with the U.S. Supreme Court to support the plaintiff, Abigail Fisher, in the Fisher v. University of Texas lawsuit and urge a total ban on racial discrimination in college admissions. Local leaders expressed viewpoints and suggestions on how to make the equal-opportunity feasible for all-college applicants who aspire to enroll into the top universities in the U.S. A few key takeaways include: